The government has launched the ‘Seven Steps Farmer Welfare Scheme’ for farmers. In the last 4 years, farm produce worth Rs 15,000 crore has been procured from farmers at support prices.

Inauguration Program of Cow Maintenance Expenditure Scheme and Natural Agricultural Insect Scheme under Seven Steps Farmer Welfare by Gujarat Government Shri R.C. Was presided over by Faldu. Out of the seven-step farmer welfare scheme, two more schemes were launched and the benefits were distributed. 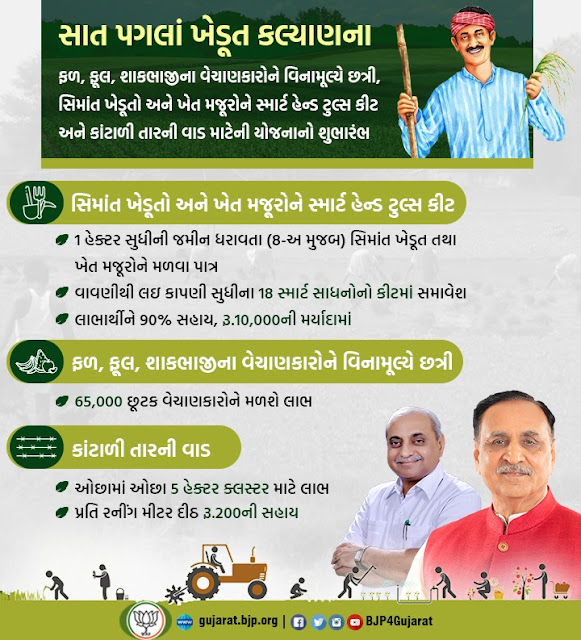 Agriculture Minister Shri R.C. Faldu said that in times of trouble, the state government has stood by the farmers and implemented various farmer oriented schemes, making the saying ‘farmer is the lifeblood of the world’ meaningful. To convert our farmer friends towards cow based natural farming, the state government will provide assistance of Rs. 10,200 / – per annum to the farmer friend under the cow maintenance cost scheme. Poisoned crops grown from various toxic fertilizers available in the market are harmful to our health but with cow based natural farming our farmer will be able to get a fully organic crop which will also be very useful for our future generations. In addition to this, under the Natural Agriculture Insect Scheme, the farmers will be provided with the kits required for cow based farming. The act includes drums and plastic baskets for the deadliest incident.

The Chief Minister e-launched the ‘Seven Steps Krishi Kalyan’ scheme at 80 places in 33 districts across the state under the auspices of the Department of Agricultural Farmers Welfare and Co-operation, Gandhinagar. In this context, he added that Gujarat has become a leading role model for the balanced development of the state with new resources and modern farming methods in the growth of agriculture, industry, service sector. Today, in a single day, Rs. 400 crore was provided. 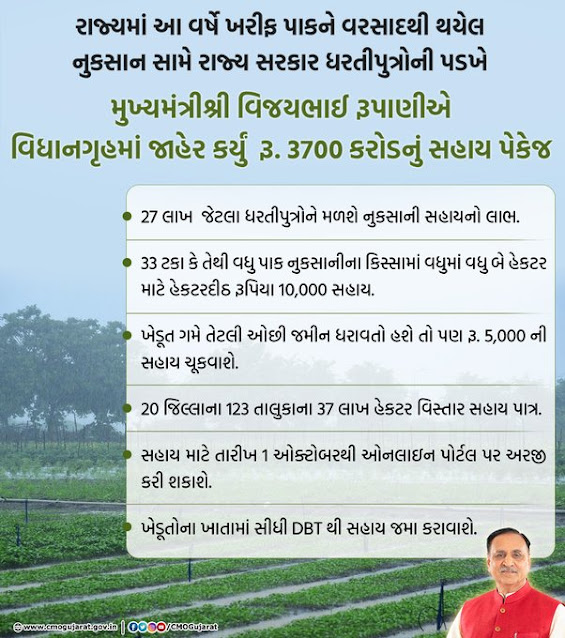 Two schemes were launched today. Under this scheme, along with agriculture and economic upliftment of the sons of the earth, new crop production, crop storage, distribution of advanced implements to small and marginal farmers, cow based farming, Kisan Parivahan Yojana and Mukhyamantri Pak Sangraha Structure Yojana cover seven steps. Are taken. Among these two important steps ‘Mukhyamantri Pak Sangraha Structure (Godown) Yojana’ as well as ‘Kisan Parivahan Yojana’ were launched today. According to this, the government provides a maximum assistance of Rs. 30,000 to the farmer for such godown structure in the Chief Minister’s Crop Storage Structure Scheme. 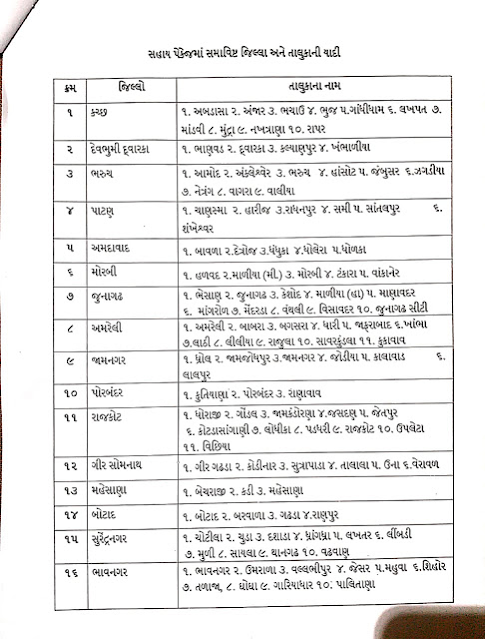 The state government has provided assistance to 1 lakh 25 thousand sons of the earth. A maximum of Rs. The government provides Rs 75,000 to buy a small vehicle. In a single day, the state government has provided Rs. 400 crore assistance has been paid. As a result of this assistance, in the next three months, the storage capacity of 2 lakh 32 thousand tons of food grains in the godowns of the farmers of the state will be increased and crop wastage will be stopped. Not only this, through Kisan Paribahan Yojana, the beneficiary farmers will also be able to sell their produce in the market easily through small vehicles and turn towards economic prosperity.

APPLY ONLINE FROM I-KHEDUT FROM HERE

Vijaybhai Rupani distributed such aid checks to five beneficiaries. In Gandhinagar, such aid checks were distributed to five beneficiaries. The Chief Minister made it clear that in the last two decades, BJP governments have remedied the long-awaited situation of farmers whether it is for power connections or for urea fertilizer. Now, the farmer gets timely fertilizer and 8 to 10 hours of electricity – he said, adding that the Dinkar scheme will provide electricity on a daily basis in the coming days. This government has given loans to farmers at zero percent interest. By buying at a support price of Rs 15,000 crore, the world’s power has been strengthened. Now, the seven-step agricultural welfare scheme aims to enable the farmer to satisfy the hunger of the whole world.