News of relief for college students, to be taken in July Uni. Exams

New Delhi: As per the government’s guideline, the UniO exams will be held from 25th, but many representations are being made in Ahmedabad not to start and postpone the UG-PG exams of Gujarat Uni from 25th. If the student unions are pushing, then even the professors are on the ground to push back. Following this, in today’s meeting of the examination management committee, it has been decided to postpone the examinations from June 25 in the first week of July.

Gujarat Uni has formed a small committee of 13 members to solve the complex question of the examination. In addition to all the faculty deans, syndicate members have been appointed and the director of the examination department whose job it is to conduct the examination has not been appointed in the judging committee. If a committee of 13 members is formed among the invited members and a meeting was also held today. But no decision has been taken. In the examination committee meeting various issues including keeping taluka wise centers and screening at each center will be discussed in the first week of July instead of taking exams from 25th June. Was decided to take. A meeting of the Academic Council and Syndicate will be held in two days to finalize other matters starting from preparing the time table of the examination.

A lockdown was imposed in the country from March 25 to curb the Corona virus epidemic. Various examinations conducted by the country’s universities as well as other educational institutions were postponed from March.

Many activities have been allowed in all areas in the country except the blocked areas during the unlock phase, but regular operation of schools, colleges, universities as well as other educational institutions has not started.

Only committees including examination grievance cell committee, examination management committee are formed and meetings are held. But there is still no place to give results or take exams and new admissions to the second-fourth semester students. Even though it has been ten days since the government announced the guideline, how many students are yet to get results, how many students are from Ahmedabad, Gandhinagar and other districts? Could not prepare any data including or time table.

The situation in Gujarat Uni is similar to the current lack of leadership in the government. Gujarat Uni does not have a permanent Chancellor and the Chancellor in charge is weak in decision and the Registrar is only nominal so that important decisions like announcing results of mass promotion, taking exams and admission are- It is important that Gujarat University needs a permanent Chancellor at such a time but students are being victimized in the internal battle of politics in Hunsatunsi. If the government wants, it can complete the search committee process and appoint a new Chancellor but a lesson to the previous Chancellor. Politics is being played to make the Vice-Chancellor happy by giving him the post of in-charge and to appease some opponents. Committee members, syndicate members are blaming the government and the in-charge Chancellor as if they do not like the university.

Rajasthan, like other states in the country, is witnessing a steady rise in cases of coronary heart disease. In this situation, schools and colleges are not opening, which is why the Rajasthan government has taken this decision. The decision was taken by CM Gehlot at a high-level meeting on Saturday.

Under which examinations for undergraduate, postgraduate and technical institutes have been canceled. 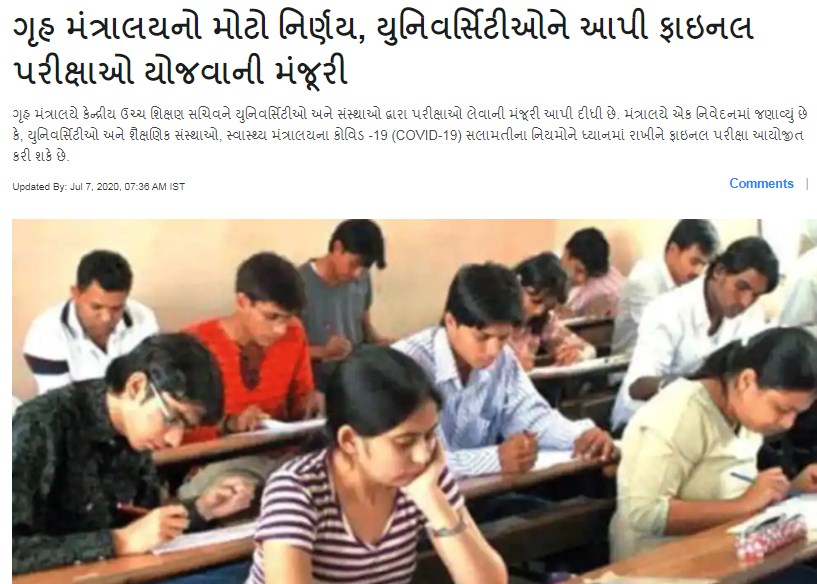 Students appearing for these exams will be admitted directly into the following year. The State Ministry of Human Resources will decide the Marx process.

In a letter to the Union Higher Education Secretary, the Home Ministry today allowed universities and institutes to conduct examinations, the home ministry said in a statement. According to the home ministry, last year’s exams will be compulsory and will be conducted as per UGC guidelines. It will also be mandatory to follow the Standard Operating Procedure (SOP) issued by the Ministry of Health during the examination.