The Nokia 5310 has been launched by HMD in the global market and is a refreshed version of the Nokia 5310 XpressMusic launched in August 2007. In this smartphone, the user will get 22 days battery backup on a single charge. 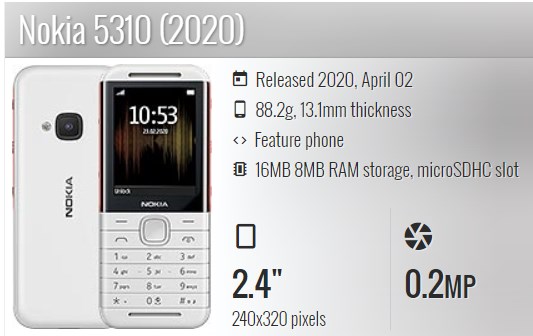 Nokia has launched its old feature phone in India in a new incarnation. The Nokia 5310 has been launched by HMD in the global market and is a refreshed version of the Nokia 5310 XpressMusic launched in August 2007. In this smartphone, the user will get 22 days battery backup on a single charge. The Nokia 5310 comes with a preloaded MP3 player and comes with a wireless FM radio. The company also includes dedicated music-keys and dual speakers. A camera sensor with LED flash is also provided on the rear panel of the phone.

The new Nokia 5310 is priced at Rs 3,399 in India. Buyers will be able to buy the phone in a black-red and white-range color combination and will go on sale on Amazon on June 23. The device can also be purchased from the Nokia India online store. Pre-booking of the phone has started from today on Nokia online store. Online retailers will start selling the device from July 22.

Specifications and features of Nokia 5310

The new dual-SIM Nokia 5310 comes with a Series 30+ operating system and a 2.4-inch QVGA (240×320 pixels) display. The device will come with MediaTek’s MT6260A processor and 8 MB of RAM. The phone comes with 16MB of onboard storage, which can be expanded up to 32GB with the help of a microSD card. The phone also comes with a VGA camera with LED flash on the rear panel for photos and videos.

The device is offered by HMD Global for Bluetooth v3.0, microUSB port and 3.5mm headphone jack connectivity. You can also listen to wireless FM radio in this device. The removable battery of the phone will give the users more than 20 hours of talk time and up to 22 days standby time on a single charge. The phone weighs only 88.2 grams and has a thickness of 13.1mm.

With over 130 million people buying feature phones in India, the company has come up with this cool phone for music lovers, HMD Global quoted International Data Corporation as saying.