Amid the India-China border dispute, all Chinese items, including smartphones, are being opposed. There is a demand for indigenous smartphones in Teva. With that in mind, indigenous tech company Micromax will be making a comeback soon. The company is preparing to launch 3 new smartphones. It includes budget smartphones with premium features and a modern look. The company has confirmed this by tweeting. 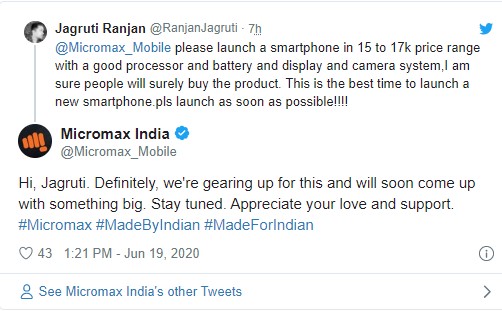 Micromax last launched the iOne Note smartphone in October last year. It was priced at Rs 8,199.

According to experts, Micromax’s comeback will be difficult

According to Navkendra Singh, director of Devices and Ecosystems, Micromax could definitely try for a comeback at this time. This comeback, however, has many pitfalls. At the moment, many tech companies are considering making a comeback in India. Currently the top 5 brands in the market cover 75% of the market. Micromax has to work hard at that.

At one time Micromax was dominant

Micromax once dominated the tech market. Gurugram-based company became the 10th largest company in the world in the third quarter of 2014. However, with the entry of Chinese tech companies like Xiaomi, Vivo and Oppo in India, Micromax lost its popularity. In the year 2018 the company launched the Infinity N11 and N12 smartphones and in the year 2019 the company launched the same smartphone iOne Note.